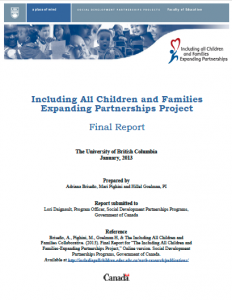 Our final online and interactive report describes the activities the Including All Children and Families-Expanding Partnerships Project (Social Development Partnerships Program, Government of Canada, 2009 – 2012) at the University of British Columbia. It includes a description of our research studies and summaries with preliminary findings, also outlining our next steps. The report also describes the resources and materials, including the online course and questionnaires for parents and professionals. We include links to audiovisual material that complements our report, for example, links to publications and online stories capturing different research and community-related aspects, a presentation on our trips to the North and Interior regions created by Maya Goldstein, MA, research assistant; and an interview with Dr. Dana Brynelsen, former Provincial Advisor with the Infant Development Program of British Columbia (IDP of BC) conducted by Adriana Briseno, Post Doctoral Fellow, UBC Faculty of Education.

Pighini, MJ (2012). “From here to there I need a hand”: The experiences of parents of young children diagnosed with ASD. CIRCA Colloquium Series, Faculty of Education, The University of British Columbia (Pt Grey), March 6, 2012.